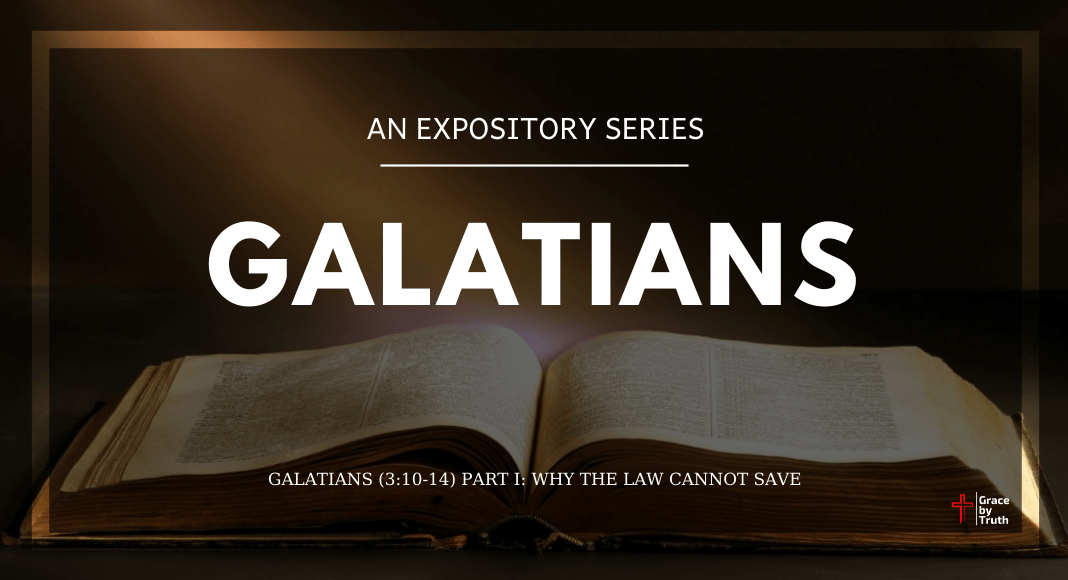 Why the Law Cannot Save

I. It requires perfect obedience (v.10)

– No one can be justified by the Law.  “In other words, the fact that those who trust in the works of the Law are obligated to keep all things in the law, without exception, places them inevitably under a curse, because no one had the ability to abide by everything the divine and perfect law of God demands.” [1]

– “A misguided zeal led some [religious Jews] to trust in external observances alone for salvation. Others [common folks] probably looked to such practices as the means of acquiring merit without a clear understanding of its purpose.” [2]

– “God’s written law itself marks the danger of trying to live up to its standard, which is perfection. If you are relying on works of the law as your means of salvation, then you have to live by them perfectly.” [3]

A. Justification requires faith not human works or effort. [Phil. 3:4‐6]

– “Paul explains further why no one can be righteous by the law. Righteousness is not by the law, for the law requires perfect obedience and human performance. Faith, however, looks to what God has done in Christ for salvation, relying on God’s work rather than one’s own.” [4]

– “So that the justified man is not justified by the law, but by faith. He stands before God not in what he does, not even in what the Spirit enables him to do. His own prayers and tears and communings with Christ, his own labors, his earnest and indefatigable attempts to extend the kingdom of Christ—all tell for nothing in the matter of his justification. He hangs them all upon the cross of Christ and relies only upon the cross, looking in no manner whatever to anything that comes of himself.” [5]

A. Those that trust in Law keeping reject God’s redemption in Jesus Christ.

– “Christ justifies those who believe in Him by buying them back from their slavery to sin. The price He paid was the only one high enough to redeem all of mankind, the “precious blood, as of a lamb unblemished and spotless, the blood of Christ.” [6]

B. Christ redeems through the atonement on the cross.

– “Anti always has the idea of equivalence, exchange, or substitution. It never has the broader idea of ‘for the sake of’ or ‘on behalf of’.” [7]

– “What does redemption mean? It does not mean redeemability, that we are placed in a redeemable position. It means that Christ purchased and procured redemption.” He makes us His own by the purchase of His own blood. [8]

~ People are redeemed from something; namely, from the marketplace or slave market of sin.

~ People are redeemed by something; namely, by the payment of a price, the blood of Christ shed for us on the cross.

~ People are redeemed to something; namely, to a state of freedom; and then are called to renounce that freedom for slavery to the Lord, who redeemed them.

1. Propitiation‐ Propitiation means the turning away of wrath by an offering. In relation to soteriology (salvation), propitiation means satisfying the wrath of God by the atoning sacrifice of Christ. Christ is the offering by which his blood is the acceptable sacrifice for sin. Thus, God is satisfied by Christ’s payment for all of the believer’s sins, past, present and future. (1 John 4:10, 1 John 2:2)

– “The cross had this propitiatory (satisfying) effect because in his suffering Christ assumed our identity, as it were, and endured the retributive judgment due to us (‘the curse of the law,’ Gal. 3:13) as our substitute, in our place, with the damning record of our transgressions nailed by God to his cross as the tally of crimes for which he was now dying.” [9]

A. Belief or trust in God is the requirement for salvation. Mere assent to the truth claims about God or the gospel will not save anyone.

a. Faith or believing involves 3 facets:

2. Belief (assensus)‐ A mental assent to the truth claims of the Gospel of Christ.

3. Trust (fiducia)‐ An exercise of personal trust in the truth claims of the Gospel of Christ, which results in justification and a transformation of one’s life.