What’s Most Important in Life

The most important thing in Paul’s life, and that he sought to share, was the saving Gospel of Christ. Salvation is by faith alone in Christ alone.

A. Paul wrote to the churches personally.

– “The large letters he used probably did not refer to the length of the epistle…but to the size of the letters he inscribed. It may be that Paul wrote the conclusion in capital letters…to give a final emphatic thrust to his message.” [1]

a. Judaizers:  Taught salvation is by faith plus keeping the Law.

2. Sought to corrupt the Gospel.

3. Sought to make converts to their false doctrine.

– “…Religious acts and observances not only have no value in opposing the flesh but are most often produced by the flesh in order to please the flesh. They give the flesh great satisfaction in making displays of religious devotion that require no heart righteousness or reliance on the Holy Spirit. Because they are strictly superficial, the most fleshly and ungodly person can learn to practice them with skill and feigned sincerity.” [2]

– “Paul gloried in the cross because it was the sacrifice of the Lord Jesus Christ on the cross that was the source of his and every believer’s righteousness and acceptance before God and…Christians honor and praise the cross because Christ’s sacrifice there provided redemption and eternal life, and that is why it is the supreme symbol of the gospel,” [3]

– “There are many things about the cross that I don’t understand. But this one thing I know—it is the way of salvation, and I’m to come by faith. Even though it may seem foolish and irrational, and it may not seem the right thing to do, and people may laugh at it, yet God says He has chosen the preaching of the cross to bring men to Himself.” [4]

a. Benefits of the Cross to those who believe:

1. Peace – Peace with God because of reconciliation.

2. Mercy‐ Forgiveness of sin and judgment.

b. Gentiles and Jews (The Israel of God)

– “The Israel of God refers to Jewish believers in Jesus Christ, to those who are spiritual as well as physical descendants of Abraham and are heirs of promise rather than of law. They are the real Jews, the true Israel of faith, like those referred to in Romans 2:28–29 and 9:6–7.” [5]

– “The term Israel is either used of the nation or the people as a whole, or of the believing remnant within. It is never used of the Church in general or of Gentile believers in particular.” [6]

– “These “marks” meant signs of ownership such as were branded on slaves and cattle. Paul referred to the scars on his body, which were caused by persecution for Christ’s sake, because they demonstrated he was a slave of Christ and not just a people‐pleaser.” [7]

– “Paul wanted to assure the Galatians that they were part of the family of God, the true children of Abraham…Paul concludes by reminding the Galatians of the power of such grace, and he prays that such grace will continue to be unleashed in their lives.” [8]

END_OF_DOCUMENT_TOKEN_TO_BE_REPLACED 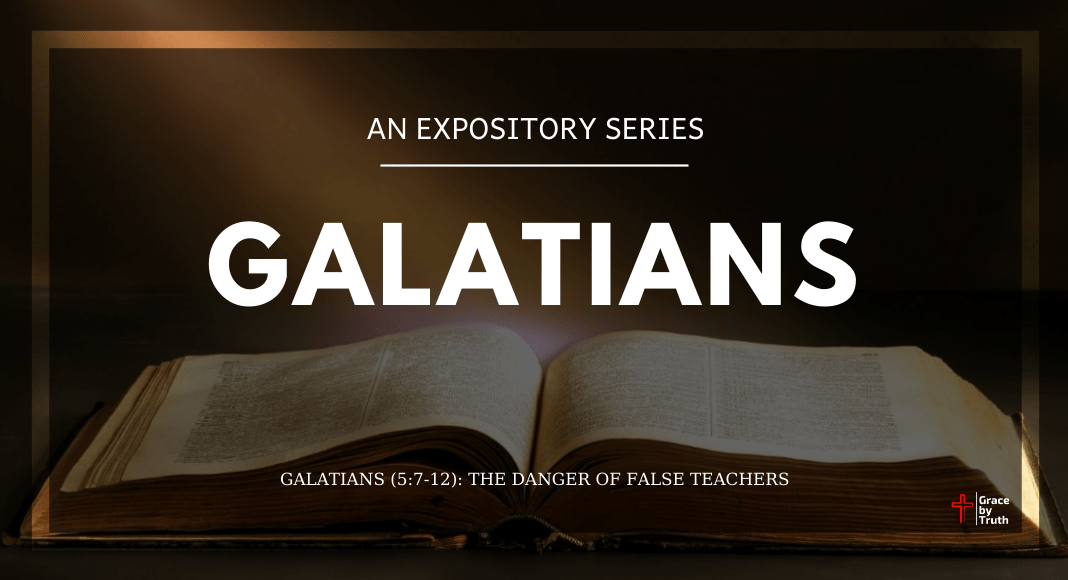 The Danger of False Teachers Galatians 5:7‐12   I. Distort the Truth (v.7‐8) A. The influence originated with the Judaizers. - “Three important applications can be garnered from this verse: (1) The Christian life is a marathon, not a hundred‐yard dash...(2) Paul...