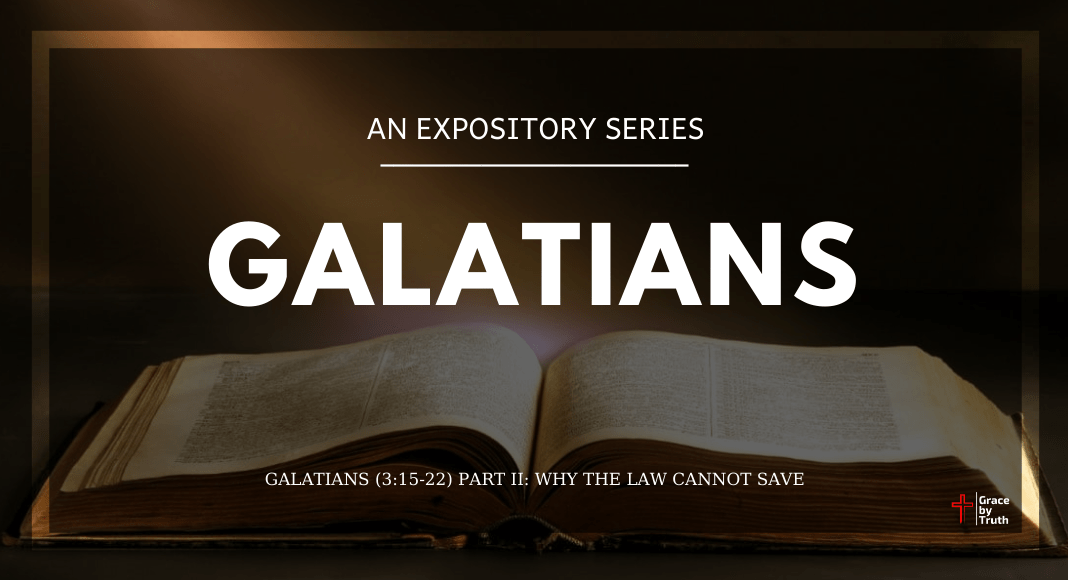 Why the Law Cannot Save – Part II

A. The Mosaic Law does not nullify the previous Abrahamic Covenant.

– “Paul declared that just as a properly executed Roman covenant (or will) cannot arbitrarily be set aside or changed (probably reference to ancient Gr. law), so the promises of God are immutable. Further, the promises…spoken to Abraham and to his seed were not fulfilled before the giving of the Law. Rather, they found fulfillment in Christ and are in effect forever. The blessing of justification by faith is therefore permanent and could not be changed by the Law. The stress on seed, not seeds, was made simply to remind the readers that the faithful in Israel had always recognized that blessing would ultimately come through a single individual, the Messiah, [Jesus Christ].” [1]

– “This covenant was bilateral [Israel and God], conditional, and nullifiable, being contingent on Israel’s obedience to God. Adherence to the Mosaic covenant was the means through which Israel could stay connected to the blessings of the Abrahamic covenant. Keeping the Mosaic covenant out of love to God would lead to spiritual and material prosperity, but disobedience would result in judgment, including removal from the land and dispersion throughout the nations (Deuteronomy 28–29).” [2]

B. The fulfillment is in a person not Israel as a people group.

– “Both the Greek term sperma (seed) and the corresponding Hebrew term (zera‘) are like the English seed in that they can be either singular or plural. Apart from inspiration by the Holy Spirit, Paul could not have established such a crucial interpretation on the basis of grammar alone. Hebrew grammar, like Greek and English, allows, but does not necessitate, the singular.” [3]

– “The one and only heir of every promise of God is Christ. Every promise given in the covenant with Abraham was fulfilled in Jesus Christ and only Jesus Christ. Therefore the only way a person can participate in the promised blessings to Abraham is to be a fellow heir with Christ through faith in Him. Whether before or after Christ came to earth, salvation has always been provided only through the perfect offering of Christ on the cross.” [4]

– “By definition, an inheritance is not earned but simply received, and to work for that which is already guaranteed is foolish and unnecessary. Trying to earn the inheritance God promises through faith in His Son is much worse than foolish. To add works of the law to faith in God’s promise is to “nullify the grace of God” and to cause Christ to have “died needlessly” (2:21).” [5]

– “The Law is not the cause of the act of sin; the principle or nature of sin within an individual is. But the Law’s specific commandments stimulate the sin principle into acts that violate the commandments and give those acts the character of transgression . As Paul concluded, Apart from Law, sin is dead. This does not mean that sin has no existence without the Law, but that without the Law sin is less active, for the Law arouses “sinful passions”. [6]

– “The purpose of the law was to demonstrate to man his total sinfulness, his inability to please God by his own works, and his need for mercy and grace. The Law … was added to show the depth of man’s transgressions against God. It was given to drive him to desperate guilt and the awareness of his need for the Deliverer.” [7]

– “While God made promises to Abraham directly, the Law was established by a mediator. There were in fact two mediators, the angels representing God, and Moses representing the people….A mediator implies a covenant between two parties both of whom have responsibilities, facts true of the Mosaic Covenant. On the other hand God is One, that is, the “promise” (v. 19) was unilateral and was given to man directly without a mediator, God alone having responsibility for fulfilling it.” [8]

A. The Law was to point men to Christ.

B. The Scripture confirms man is a sinner by nature and by choice.

a. Imputed Sin‐ Federal or Representative View‐ When Adam sinned; he acted as the representative of the human race. Thus, when he sinned, all sinned in Adam. [Rom. 5:12; Heb. 7:4‐10]

– “The reason is that Adam was acting as the covenantal representative of the human race. Adam was given a position of headship by God, so his sin affected all who would come after him. That’s why Paul said sin passed to every person through Adam…” [10]

b. Inherited Sin‐ Inherited sin is the sinful state into which all people are born. We have a constant bent toward sin. It comes to every member of the human race through one’s father (Gen. 5:3).

1. A Personal sin is any thought or attitude, act or failure to act, that violates God’s standard of perfect holiness. (James 3:2; Rom.3:23)

2. The penalty of the unbeliever’s sins prevents him from having fellowship (a personal relationship) with God. Personal sins are the outward expression of inherited and imputed sin.

3. The Law was given to show man his utter need for forgiveness and redemption.

– “The ultimate purpose of [the Law] shutting up men under sin and death was that the promise by faith in Jesus Christ might be given to those who believe.” [11]

Man must be made aware of his sinfulness and need for salvation against the backdrop of the Law. This was and is the Law’s purpose. The Law drives man to grace and salvation in Jesus Christ.