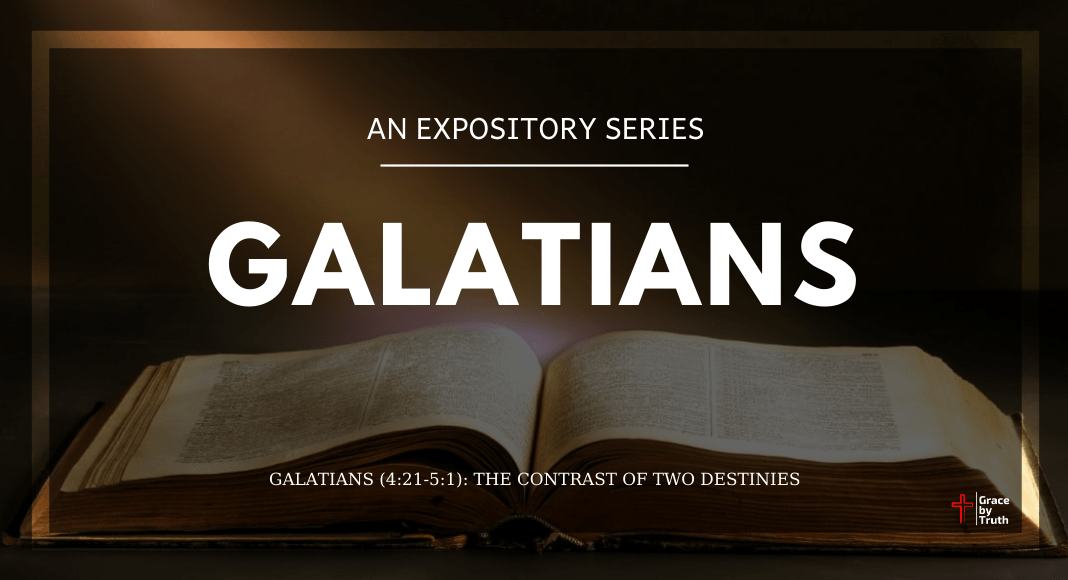 The Contrast of Two Destinies

Paul’s argument in this passage is formed by the use of an analogy. Paul uses contrasts between children of the slave woman (Hagar‐ faith plus law keeping) with the children of the free woman (Sarah‐ faith alone in Christ). He argues that since believers are now free in Christ, they are not to return to living in slavery under the Law.

B. Paul reveals the significance of the sons (v.23)

A. Paul compares Hagar and Sarah to two Covenants. (v.24a)

2. Mt. Sinai and Jerusalem are identified with Judaism, where the Jews who rejected Jesus lived in spiritual slavery. These are Hagar’s spiritual descendants.

– The spiritual descendants of Sarah through Isaac…live in the Jerusalem above and are free, because she is our mother, if we are among those who live by faith in God’s gracious promise, given to Abraham and fulfilled in Jesus Christ.” [3]

– “This [verse] prophesied the changing fortunes of Israel, which Paul applied to Sarah’s history. Israel before her Babylonian Captivity was likened to a woman with a husband. The barren woman was Israel in Captivity. The woman bearing more … children may have pictured Israel restored to the land after the Exile, but more particularly it portrays her millennial blessings. Paul applied this passage (he did not claim it was fulfilled) in this context to Sarah, who though previously barren, was later blessed with a child, and who would ultimately enjoy a greater progeny than Hagar.” [4]

A. Paul compares Isaac to believers positionally and practically (v.28‐30)

– “The persecutors are going to be thrown out, and the persecuted will receive their promised and rightful inheritance. As Sarah had Hagar and Ishmael cast out of Abraham’s household, so will their unbelieving descendants, those who live by works of the flesh, be cast out of God’s household.” [6]

“Throughout this letter, and indeed throughout all of Scripture, such contrasts reflect and demonstrate the contrast of the ages: the way of Satan and the way of God. But in God’s ultimate and unchangeable plan, Satan and his way will be destroyed, and only the way of God will remain, forever and ever. Vacillating between the two is unacceptable.” [7]

1. Legalism has no place in the church because it emphasizes trust in one’s own works rather than God and His grace.
2. Paul’s analogy presented two mothers and sons. Hagar is after the flesh and Sarah is after the Spirit. Do you know who your Mother is?
3. Salvation is by faith alone but never by a faith that is alone. Justification will produce some level of works borne out of a love for God.