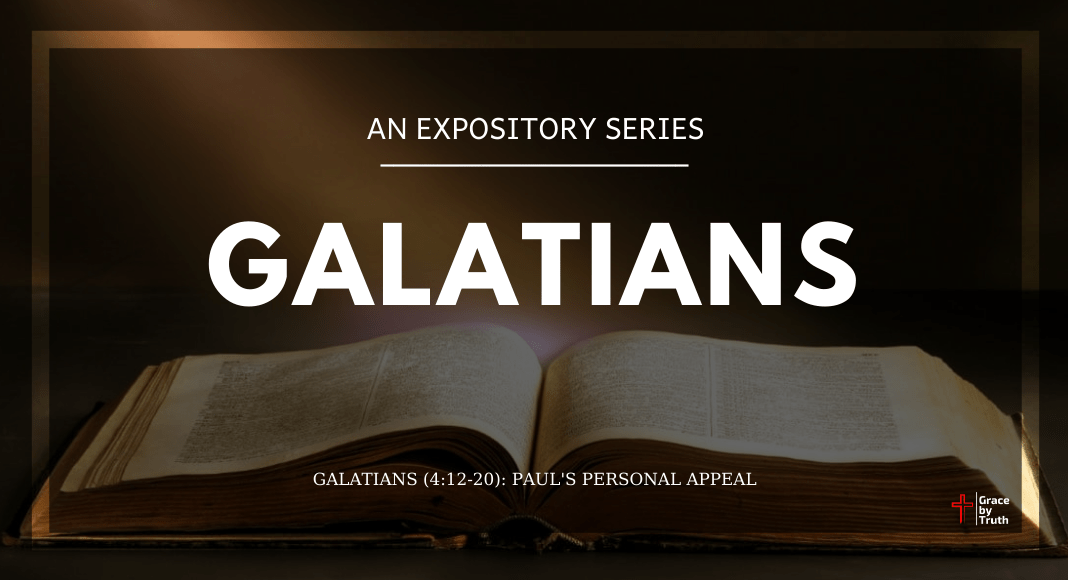 A. Paul wants Christians to live by grace not law (v.12)

a. Legalism‐ Man’s attempt to obtain right standing before God and men by using religious or man‐made rules that give the appearance of holiness but are actually works of the flesh. [Matt. 6:1‐2, 5, 16, 23:1‐5]

– “Paul’s appeal to his brethren in Christ was for them to recognize and live by the spiritual freedom all believers have in God’s grace. That is the central truth of the epistle, a truth he had previously preached and taught to the Galatians but one the Judaizers had seduced them into doubting and forsaking.” [1]

a. Paul was physically ill but spiritually strong [Malaria or Ophthalmia].

– “There is only one explanation for such a response. Their reception of Paul was not conditioned by his human appeal but was dependent upon the message which he brought, the truth of the gospel by which the Galatians were saved.” [2]

A. Because of a lack of discernment, the Galatians now view Paul as an enemy. (v.15‐16)

a. The truth once brought salvation, now it divides.

– “And that is exactly the spiritual state of multitudes in the church today. They are utterly preoccupied with self. They want their own problems solved and their own comfort elevated. Their spiritual development is arrested, and they remain in a perpetual state of selfish helplessness. It is evidence of a tragic abnormality. Arrested infancy means people do not discern. Just as a baby crawls along the floor, putting anything it finds in its mouth, spiritual babies don’t know what is good for them and what isn’t. Immaturity and lack of discernment go together; they are virtually the same thing.” [3]

A. He cautions the Galatians about the Judaizers (v.17)

1. To zealously seek after the Christians.

2. To separate the Galatians from the truth of the Gospel, a by faith alone salvation.

3. To make the Christians submit to the Judaizer’s teachings.

– “Three times in this letter Paul refers to the desires of the false teachers. They longed to make a good showing in the flesh (6:12) and to have the Galatians circumcised so they could boast in them (6:13). Here they desire to turn the Galatians away from Paul so that the Galatians will show zeal for them as teachers. The Judaizers, in contrast to Paul, had an ardent desire to be praised and honored.” [4]

– “He [Paul] himself had eagerly sought them when he first preached the gospel in Galatia. But it was in a commendable manner, out of love for Christ and a deep desire for their salvation….Paul warned against the Judaizers not because they opposed him and personally wounded him, but because they opposed the glorious, saving gospel of Jesus Christ.”5 [Rom. 10:1‐3]

a. Paul wants the Galatians to be like Christ.

– “All his anxiety arose from their falling into ritualism and legalism. He wanted to see them living by faith upon Jesus and worshiping God with free spiritual worship. The fashionable religion of the present day is overlaid with pompous forms, and the plain gospel of salvation by faith in Jesus is despised. Nevertheless, to the doctrine of grace let us steadfastly cleave, for it alone is truth, and in it alone is salvation.” [6]

– “We cannot gain discernment overnight or through a mystical experience. Discernment will come only as we train our minds to be understanding in the truth of God’s Word and learn to apply that truth skillfully to our lives.” [7]

3. The power to change a person’s life is in the gospel and not in the persuasiveness of, man or his methodology.

– “Men are not saved by a messenger, nor the persuasiveness of his methods but by the truth, the message…Too much attention is given to the messenger and too little to the message.” [8]