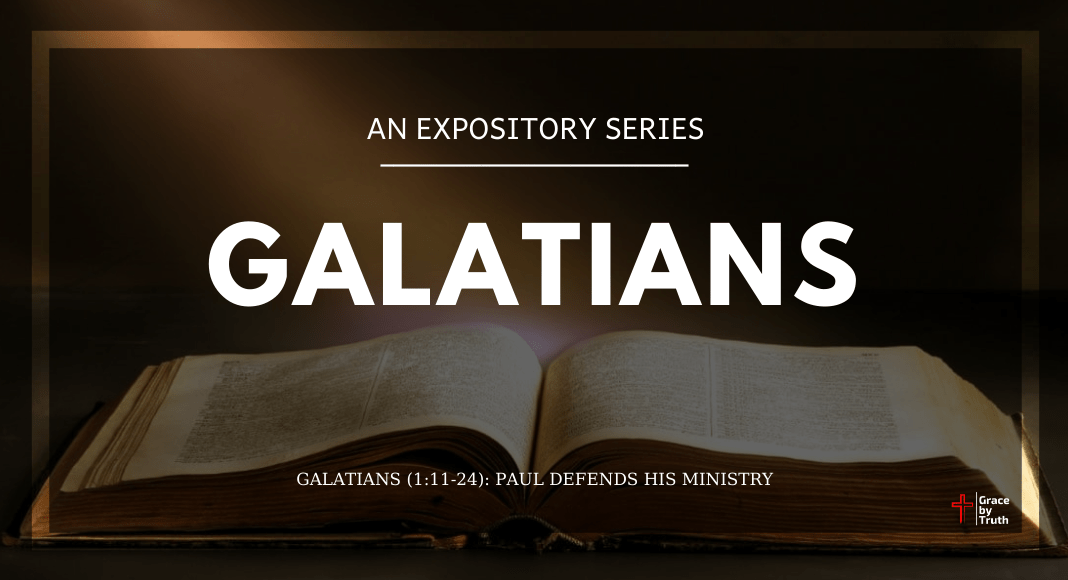 A. Paul’s gospel message did not originate from man (v.11)

– “Had Paul proclaimed a gospel that was according to man, it would have been permeated by works righteousness, as is every humanly devised system of religion. Man’s sinful pride is offended by the idea that only God’s mercy and grace can save him from sin, and he therefore insists on having a part in his own salvation. The very fact that Paul preached a message of salvation in which works play absolutely no part was itself evidence that his message was from God and not … man.” [1]

– “Paul had been taught directly by Christ, the highest authority. The gospel of grace that Paul preached is true because it came directly from God.” [3]

A. Paul defended the gospel based on his own testimony.

– “Paul did not initiate the choice to be saved, much less the choice to be an apostle. He was “called as an apostle of Jesus Christ by the will of God” (1 Cor. 1:1). The phrase when He who had set me apart refers to the elective purpose of God before Paul was even able to consider a choice. No person is saved or called to leadership in the church except by such sovereign and predetermined divine will. “He predestined us to adoption as sons through Jesus Christ to Himself, according to the kind intention of His will, to the praise of the glory of His grace, which He freely bestowed on us in the Beloved” (Eph. 1:5–6; cf. v. 9).” [5]

– Though accomplished at the cross, salvation is subjectively realized in time by those who have been regenerated or born again, through hearing and believing the gospel. [1 Cor. 1:30]

c. After his salvation, Paul went to the deserts of Arabia to be personally trained by Christ (v.17)

– “In the solitudes of Arabia, Paul studied the Old Testament, communed with God, and obtained insight into the deep things of God; his testimony was therefore fresh from heaven. More of God and less of man is what we all need.” [7]

– “The revelation that Paul received unfolded many mysteries concerning Christ‐ His Person, His ministry on earth, His present intercessory ministry in heaven, the mystery of the church as the bride of Christ, His return, His future kingdom, and so forth. Being the thinker that he was, Paul must have learned why salvation was of the Lord, why man could not establish his own righteousness, why all the Jews were lost even though they were the chosen people of God, why Christ is the only way to the Father, and why Christ’s death was necessary for Jew and Gentile alike. While in Arabia his knowledge of Christ was broadened and his desire to return to civilization to preach Christ was heightened.” [8]

– When this occurred: “The account in Acts [Acts 9] is incomplete, omitting any mention of Paul traveling to Arabia. Galatians fills out the historical record by informing us that Paul, after spending some time in Damascus, traveled to Arabia, and then returned later to Damascus. Acts telescopes the entire period by restricting itself only to what occurred in Damascus (9:19–25).” [9]

A. Paul met with Peter and James to develop insight into Jesus’ life and ministry. He did not seek their endorsement or approval (v.18‐20)

– “Paul’s point in this part of the letter was to affirm that he had received his gospel directly from the Lord, not from the other apostles. He only visited two of them for two weeks, and only after three years had elapsed since his conversion. Any accusation that he was a second‐hand apostle, receiving his message from the Jerusalem apostles, was false.” [10]

B. Paul’s works proved his ministry since he did not have any contact with the Judean churches. (v.21‐24)

a. Paul’s Authority as an Apostle:

1. The Apostles and churches glorified God because of what happened to Paul.

– “Paul’s remarkable conversion and independent course made him very decided in his teaching. The more certainly grace works in us, the more attached shall we be to the gospel of grace, and the more opposed shall we be to all those errors which rob God of His glory.” [11]

1. Paul’s gospel is Christ’s gospel. This is the anchor by which all other biblical teaching finds its fulfillment.

2. Never change the purity (offensiveness) of the gospel in order to please men. Men do not need to be told about a wonderful plan for their lives, they need salvation from their sins and deliverance from the wrath of God, which is to come [Acts 17:30‐31]. “The angles and corners of the gospel are its strength; to pare them off is to deprive it of power. Toning down is not the increase of strength, but the death of it. Learn, then, that if you take Christ out of Christianity, Christianity is dead. If you remove grace out of the gospel, the gospel is gone. If the people do not like the doctrine of grace, give them all the more of it.” [12]