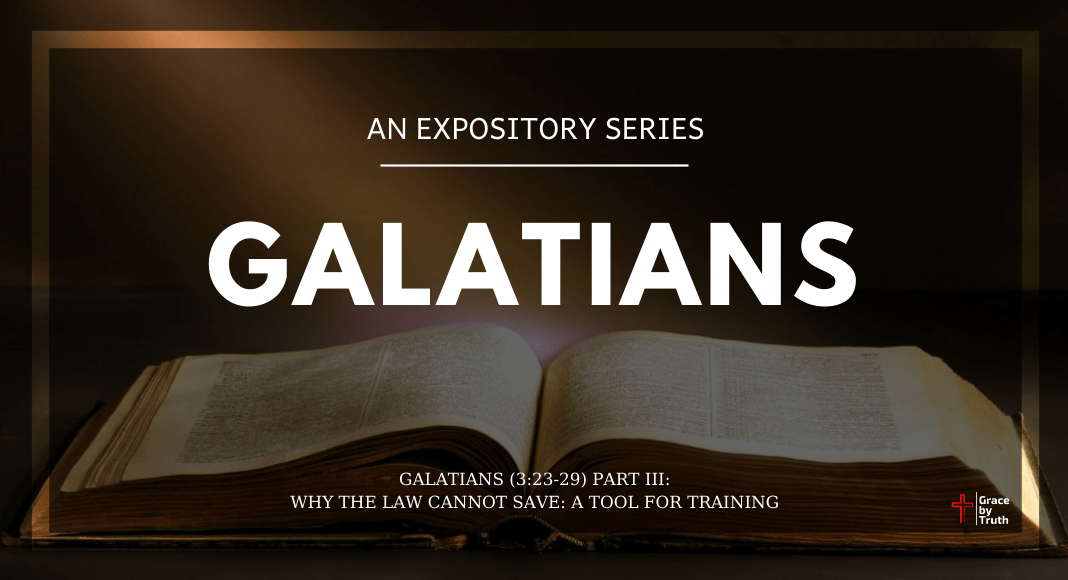 Why the Law Cannot Save: A Tool for Training – Part III

– “The word un[to] is from eis (εἰς), and is not temporal in its significance…but means here “with a view to.” That is, sinners were kept guarded under the law with a view to their exercising faith in Christ. The law shut them up to one avenue of escape, namely, faith in Christ, for during the 1500 years in which the law was in force, it was the means of convicting sinners of their sins and of causing them to look ahead in faith to the atonement God would someday offer which would pay for their sins.” [1]

– “Paul views those living under the Law as children in a state of immaturity, and he views the Law as a pedagogue, a child trainer or overseer whose responsibility it was to supervise every area of the life of the child committed to its care. It is because of this fact of immaturity that Israel needed the Law. Thus the Law was given…to a redeemed people who were in a state of spiritual infancy to meet their needs.” [2]

a. The Law was a Pedagogue – A Child Trainer

3. The trainer would start working with children at seven until they were young adults (14).

4. The trainer oversaw every aspect of a child’s life.

6. The child was free but controlled by a slave.

7. The Father would then formally adopt his son. “Adoption (Gk. huiothesia) means “to place as a son” (Eph. 1:5) and emphasizes the Roman ceremony of adoption of one’s own son into the status of adulthood with all its privileges.” [3]

– “At the Roman ceremony boys would take their toys…and offer them in a sacrifice to the gods as a symbol of putting childhood behind them. It was to that custom that Paul alludes in his comment, ‘When I became a man, I did away with childish things’ (1 Cor. 13:11).” [4]

– “The law was in force for a certain period in salvation history and functioned like a babysitter. Now that the time of babysitting has concluded, believers are sons who have obtained the promise. Believers are not only sons but they “all” belong to the people of God…to include Gentiles who believe.” [5]

– “[This] is a great mystery that the human mind cannot fathom. But in some spiritually supernatural way that transcends time and space, the person who places his trust in Jesus Christ is crucified, buried, and resurrected with his Savior, baptized into Christ.” [6]

– “The key thought behind…baptism in the New Testament is that of complete identification and unity with Christ.” Water baptism is an outward symbol of this inward reality. [7]

– “It is not, of course, that among Christians there is no such thing as a Jew, Gentile, slave, free person, man, or woman…Paul was speaking of spiritual differences—differences in standing before the Lord, spiritual value, privilege, and worthiness. Consequently, prejudice based on race, social status, sex, or any other such superficial and temporary differences has no place in the fellowship of Christ’s church. All believers, without exception, are all one in Christ Jesus.” [8]

– “Any discussion of the seed of Abraham must first take into account his natural seed, the descendants of Jacob in the 12 tribes. Within this natural seed there is a believing remnant of Jews who will one day inherit the Abrahamic promises directed specifically to them. But there is also the spiritual seed of Abraham who are not Jews. These are the Gentiles who believe and become Abraham’s spiritual seed.” [9]

1. The Gospel is only the “Good News” when it is understood against the backdrop of the Law.
2. The Law brings condemnation and death whereas the Gospel brings forgiveness of sin and life.
3. The Law requires perfect obedience and works. The Gospel requires faith alone in Christ.