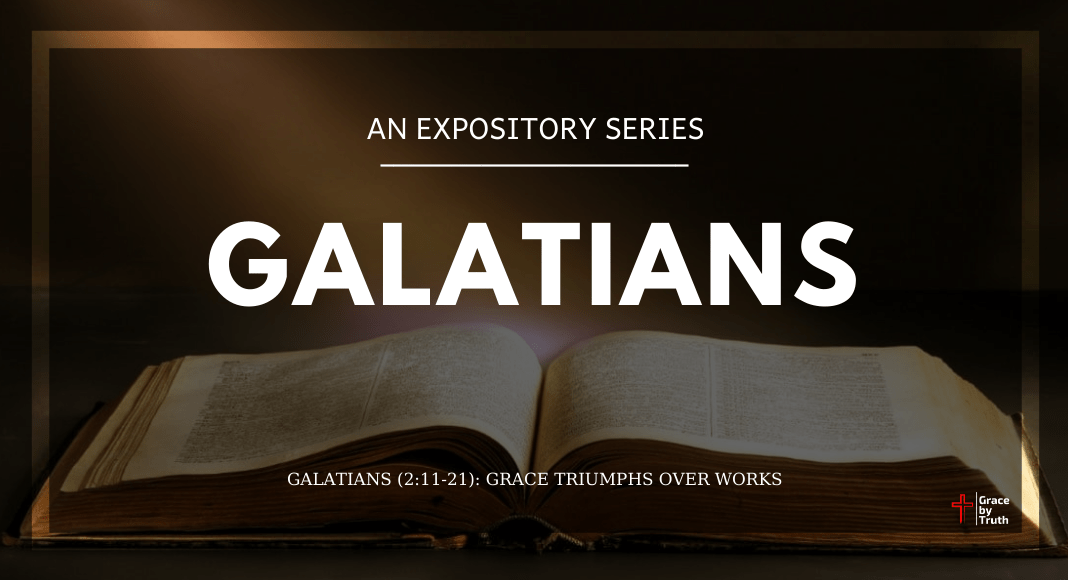 A. When confronted by the Jerusalem Jews, Peter began to withdraw from the Gentile
Christians.

– “In the Greek text the verbs “began to draw back” and “separate himself” are in the imperfect tense [continual past action], indicating that Peter’s action may have happened gradually as, little by little, he reacted to the increasing pressures of the Jerusalem visitors until finally “he drew back and began to hold aloof.” [1]

B. Peter was afraid of how he was being perceived by the men from Jerusalem.

– “Peter had been in Antioch for some time prior to the coming of certain men from James, and during that time he used to eat with the Gentiles. The certain men were Judaizers who had come to Antioch claiming to be from James but were not…These men were of the party of the circumcision and not only taught a false gospel but also made false claims of support by the Jerusalem apostles and elders. Like Peter, James at times had difficulty giving up his lifelong adherence to the Mosaic rituals and regulations…But he would hardly have sent a delegation of heretics to Antioch to undermine the true gospel and cause the church there nothing but trouble.” [2]

– “James was not in favor of making it difficult for the Gentiles by imposing the requirements of Jewish proselytes on them. But to help gentile converts not put a stumbling block in the path of Jews, he recommended that Christian teachers encourage their disciples to be careful to avoid things associated with idolatry and all kinds of sexual aberrations. If gentile Christians disregarded the convictions of Jews, they would only alienate those they hoped to bring to faith in Jesus Christ or to growth in Christ.” [3]

A. Peter and the other Jewish Christians separated from the Gentiles.

– “All of them—Peter, the other Jewish Christians, and Barnabas—were guilty of hypocrisy because while confessing and teaching that they were one in Christ with Gentiles, they were denying this truth by their conduct.” [4]

– “Humans are the only beings on planet Earth that have a built‐in longing for approval…The Bible has a name for this need for approval: the fear of man. In the Bible, the word fear means more than fright; it’s any kind of awe and reverence that causes us to subject ourselves to something or someone else.” [5]

– “When Peter sided with the Judaizing party and seemed to favor those who demanded that the Gentiles should be circumcised, our brave apostle withstood him to his face. He fought always for salvation by grace through faith and contended strenuously against all thought of righteousness by obedience to the precepts of the ceremonial or the moral law. No one could be more explicit than he was upon the doctrine that we are not justified or saved by works in any degree, but solely by the grace of God.” [6]

A. Paul presented a proof by contradiction argument to Peter and the Jews.

– “Paul said that to go back on this fundamental commitment would be, in effect, to build back the old structures of repression and slavery, structures that have been once and for all shattered by Christ’s death on the cross and the pouring out of his Spirit upon his people. To yield on this point would be like trying to put the plan of salvation into reverse! The very thought was no less blasphemous than imagining Christ as the agent of sin. May it never be! God forbid!” [7]

– “If the Judaizers were right, Paul pointed out, Jesus was wrong; if they taught the truth, He had taught falsehood and was thereby a minister of sin! Such an accusation must have shaken Peter to his bones. To be called a hypocrite stung enough, but to be called a sinner was unthinkable, and to be accused of making Jesus a minister of sin was shocking and repulsive. Yet the logic of Paul’s argument was inescapable. By his actions, Peter had in effect condemned Jesus Christ. He therefore had to forsake his Judaistic sympathies or continue to make His Lord a liar.” [8]

A. Paul declares that spiritually and positionally, the Law no longer has any legal claim over him.

– “Paul is referring to the fact that when a person exercises faith in the Lord Jesus Christ, he is placed in transcendent spiritual union with Christ in the historical event of His death and resurrection, in which the penalty of sin was paid in full.” [9]

VI. Lessons we can learn:

A. Spiritual leaders can fall into sin. Always be on guard.

B. Having the right doctrine without the right practice produces hypocrisy.

C. Truth is more important than outward harmony. Unity at the expense of the truth produces weak churches, immature Christians, and an open door for false doctrine.

D. God’s Word is to be the objective standard for church governance, never the opinions of man.

E. False doctrines that strike at the heart of the Gospel must immediately be addressed by Church leadership.

Like Paul, Christians are under the law of Christ. The basis for our actions is our love of God and our desire to please Him. We demonstrate this love through service and ministry to each other, and evangelism to the world.