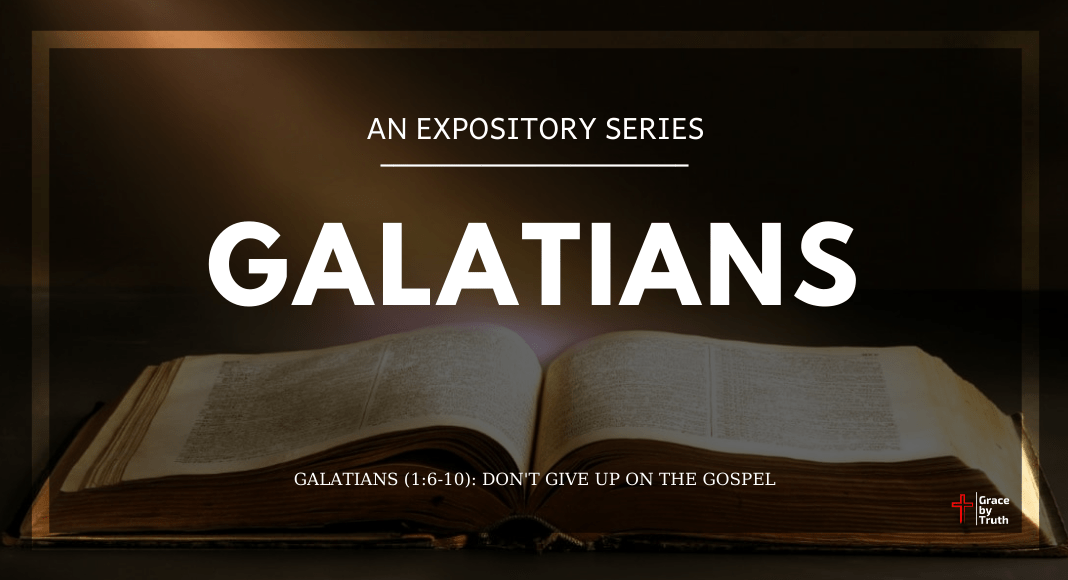 Don’t Give Up On the Gospel

– “The Galatians had been privileged to be taught by the greatest teacher the church has ever known apart from the Lord Himself; yet they readily rejected the truths of grace they had learned from him. There is still a great and urgent need for preaching and teaching that continually repeats the central truths of the gospel.”

B. Their act of desertion was willful.

– “The Galatians were a very fickle people. They seem very soon to have left the gospel, to have adulterated it, and to have fallen into Ritualism, into Sacramentarianism, into salvation by works, and all the errors into which people usually fall when they go away from the gospel.”

– “To desert the Gospel is to desert God Himself, for God is one with the Gospel…If you are to have God, you will only have Him through His saving Gospel.”

– “The most destructive dangers to the church have never been atheism, pagan religions, or cults that openly deny Scripture, but rather supposedly Christian movements that accept so much biblical truth that their unscriptural doctrines seem relatively insignificant and harmless. But a single drop of poison in a large container can make all the water lethal. And a single false idea that in any way undercuts God’s grace poisons the whole system of belief. Paul would not tolerate a single drop of legalism being intermixed with God’s pure grace.”

B. Any agent (person or angel) that teaches a false Gospel is to be accursed.

– “[Paul] was reaching for the most fanciful possibilities imaginable to make his point that absolutely no messenger, no matter how seemingly godly and good, should be believed or followed if his teaching does not square with God-revealed apostolic doctrine. The truth outranks anyone’s credentials, and every teacher or preacher must be evaluated on the basis of what he says, not who he is.”

A. Those who pervert the Gospel will face judgment.

– “Therefore, anyone who evangelizes in Galatia must proclaim the same gospel taught by Paul. If they teach a gospel contrary to Paul’s, they will face an eschatological curse. By repeating the threat of God’s curse in v. 9, the gravity of the offense of those who proclaim another gospel is underlined.”

– “The Judaizers who plagued the early church claimed to be Christians, and much of their doctrine was orthodox. They must have recognized Jesus as the promised Messiah and even acknowledged the value of His sacrificial death on the cross—otherwise they would never have gotten a hearing in the church. They claimed to believe all the truths that other Christians believed. They did not purport to overtly deny the gospel but to improve it by adding the requirements, ceremonies, and standards of the Old Covenant to the New. But anything added to grace destroys it just as surely as does anything taken from it.”

– “Since the second-century…it has been inferred that Paul’s opponents were overzealous Jewish Christians from Jerusalem. They advocated in Galatia the traditional Jewish proselyte model by requiring Gentile Christians to attach themselves to ethnic Israel. This identification was carefully confirmed by John Calvin and more casually assumed by Martin Luther. Since Calvin’s and Luther’s day the majority of Protestant scholars have identified Paul’s opponents in some way with the Jewish Christians from Jerusalem.”

– “The purpose [in confronting believer’s caught in Satan’s trap] must always be to edify Christ’s body…Thus when brethren fall into false teaching they must be treated with gentleness and Christian love in the hope that they will come to their senses and escape from the trap of the devil (cf. Gal. 5:1; 1 Tim. 3:7; 6:9) who has taken them captive to do his will. False teaching and all its negative consequences in the church are always the handiwork of Satan, but God in His grace often salvages the situation through the Christ-like ministry of His servants.”

b. Penalties for the persistent sinning Christian:

1. Temporal Punishment- God’s punishment for the believer is always corrective rather than punitive.

2. Excommunication- Being band from the fellowship of the local church may become necessary. (1Cor. 5; Matt. 18:17)

– “It is clear then that Paul is not calling for the condemnation of his opponents (that is, the Judaizers) because they are opposed to him, but rather because they are enemies of the gospel. That gospel is of divine origin, not of Paul’s invention (Gal 1:11–12). Therefore, those who pervert it subvert God’s redemptive purpose. On those who thus act and teach, the judgment of God is justly pronounced. Thus there is here no real conflict between Paul’s general call for a nonjudgmental spirit and his strong word of judgment here, just as there is no real conflict between Jesus’ teaching on love for one’s opponents and his words of judgment. In both cases, where the work and truth of God is at stake, those who reject it stand under judgment.”

– “In only two instances does the New Testament pronounce a curse on Christians for failure to do something. One is not loving the Lord (1 Cor. 16:22), and the other is preaching a gospel other than the Gospel of grace of God (Gal. 1:6–9). Not comprehending clearly the doctrine of salvation can lead to proclaiming a false or perverted Gospel, and many statements of the Gospel one hears today may well come under this curse. Yet the grace of God overpowers our unclear presentations, and people are saved in spite of, though not as a result of, an unclear or misstated Gospel.”

A. Paul’s mission was to preach truth not please men.

– “He could have pleased the Jews by preaching law observance, and the pagans by making the death of Christ a mere sacrificial transaction that placed no obligation upon the follower. But from the moment he became a Christian Paul knew nothing else but Jesus crucified. This freed him from the law, but it called him to be crucified with Christ. The only way to prove he was pleasing to God rather than men was to keep the scandal of the Cross at the heart of his preaching and take the consequences of the Cross to the heart of his living.”

– “The Gospel will always be the fork in the road. Will you please God or men. To many men become men pleasers and ear ticklers. But God pleasers are men who teach the truth of God.”