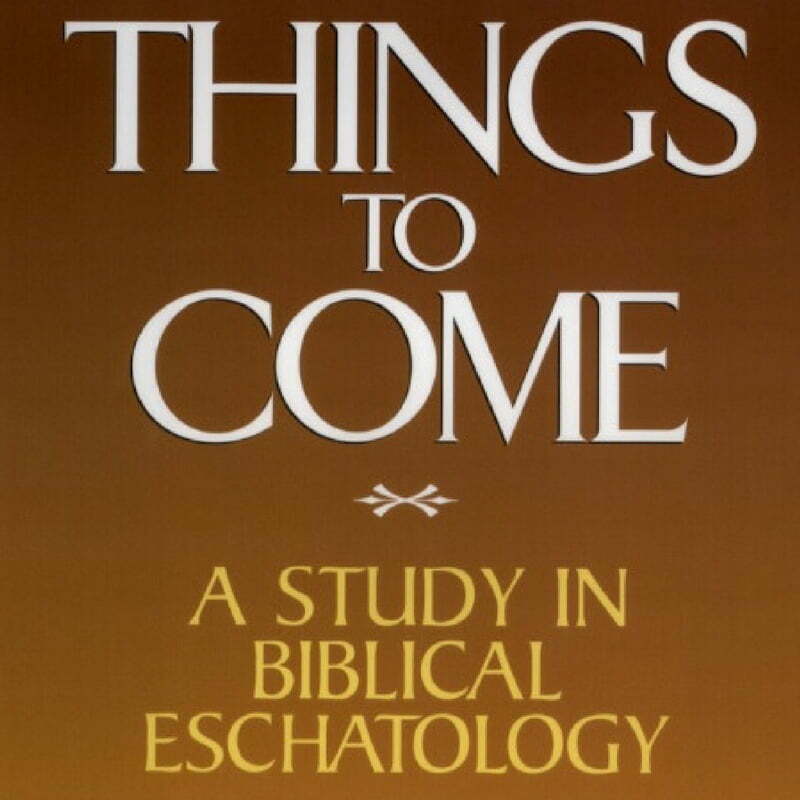 J. Dwight Pentecost is distinguished Professor Emeritus of Bible exposition at Dallas Theological Seminary, where he has taught since 1955. He has both an earned Th.M. and Th.D. from this institution as well as having become an established author, publishing numerous books ranging in topic from prophecy to the parables of Jesus. He is considered by his peers to be one of the leading proponents of dispensational, premillenial theology.

Pentecost’s work has, in a sense, become “the Bible” for dispensationalists since it was written in 1955, having sold over more than 215,000 copies. His uncanny way for explaining the dispensational eschatological schema in understandable, easy to follow language, has made him the senior “guru” of end times prophecy.

Pentecost’s goal and task for instructing the reader is stated in his book’s title. He sets out to accomplish this task by establishing a premise for his work that is established by the use of a sound hermeneutic. He then demonstrates how we have seen a radical departure from the plain meaning of the text as he systematically sets forth an overarching Biblical argument in the seven subsequent sections of his work. He all but definitively corroborates a premillennial-dispensational, eschatological view of end time events that is hard to refute. That is, he leaves no stone unturned as he confronts the rough doctrines of the dispensational system that many covenant theologians have not even attempted to methodically wrestle with, aside from symbolic dismissal. Whether one agrees with Pentecost’s conclusions or not, the reader will find this to be a scholarly work that is not only challenging and informative but also enjoyable to read.

He then demonstrates that through the span of a few hundred years the rise of a “faulty” system of interpretation became the dominant thought as scholars sought to reconcile Greek philosophical thought with Biblical revelation. This produced an allegorizing method of interpreting the Scriptures (p.21) and established a framework for what became known as Covenant theology to be built on.

Chapters two and three of this section are spent on the interpretive developments that arose from these two systems throughout the Dark Ages, the Reformation and post Reformation periods. He then deals with considerations that should be recognized in determining the context of the Scriptures. In chapter four, Pentecost finishes section one by showing how the “literal” method of interpretation will always lead the reader into a accurate interpretation of the Scriptures (p.64) if one follows the rules for interpreting prophetic passages.

In sections two and three, which covers chapters five through fourteen, Pentecost defines and demonstrates the significance of the Abrahamic, Palestinian, Davidic, and New Covenants in relation to their essential fulfillment in the future Kingdom program. He then exhibits how these covenants relate to the course of this present age, as he illustrates the theories suggested that reconcile the covenants and kingdom prophecies. He goes on to prove that the only viable view that correctly comports with the whole of God’s progressive revelation is the dispensational pretribulation rapture theory, which maintains the distinction between Israel and the church as evidenced by the gap between the sixty-ninth and seventieth week (Daniel 9). This is made evident in chapters thirteen and fourteen as Pentecost distinctly explains the two aspects of God’s program in is relation to the tribulation period for Israel and the bema and marriage of the Lamb to His church (p. 219).

His argument progresses in sections four and five to show what will happen during the tribulation period, which is known as Daniel’s seventieth week. Here he defines and explains the purpose of this period on God’s timetable. He masterfully puts faces on God’s adversaries as the nations of the world rise to conquer Israel under the leadership of the antichrist and false prophet who epitomize “the times of the Gentiles” (pp.314-339); but who will ultimately be defeated at the second advent, as discussed in section five. In it, he confronts the four main views that have been formulated to deal with the inception of the Second Advent, emphasizing the historical advocates of the premillennial schema. He even goes onto say that by using the literal method of interpretation one is forced to adhere to a premillennial coming of the Lord (p.392), elucidating that this system should be held as the most correct view. He then concludes this section in chapters twenty-three and twenty-four by wrestling with the subsequent resurrections and judgements that follow the Second Advent of our Lord.

The final two sections, six and seven, are spent dealing with the Millennium and Eternal State. Here Pentecost shows the fulfillment of the Covenants in relation to the reign of Christ, the nation of Israel, and the Church. He details the spiritual and physical characteristics of the Kingdom as he explains the function of Christ’s government and rule. He also labors quite extensively on the problematic worship practices of the “millennial sacrifices” that are spelled out in the latter half of Ezekiel’s book concerning the Temple. He remarkably proves that this conception of Ezekiel’s Temple in no way contradicts the New Testament’s theology concerning atonement. He bases this conclusion upon the value and purpose of the sacrifices themselves.

He then concludes the book by defining and explaining the future Eternal State where God will renovate existence as we know it and create and new heaven and a new earth (p.561). He leaves the reader with a message of hope and expectancy as he describes the reality of what life will be like during this time. He writes, “The glory of our expectation is that we shall be transformed into His likeness, being sinless, deathless, and experiencing the perfection of development” (p.582). Like a bag that has been neatly filled, Pentecost cinches his work leaving the reader with only one question that could possibly be asked, “How can I not believe this book?”

What the reader will find encouraging about “Things to Come,” is that it is informative but it is also easy to follow. Many times students of prophecy get lost in what they are reading because of the mass amounts of information that have to be deciphered from all over the Bible, but not so with this work. Pentecost gives a detailed chronology of events that the reader will be able to surely follow, as the themes of prophetic Scripture seem to come alive. This is without a doubt the most delectable attribute of this work and probably why it has sold over 215,000 copies. From the Old Testament to the New Testament, Pentecost will keep the reader thinking as he challenges all comers to reevaluate the dispensational system.

However, there are some references in Pentecost’s work that the more informed students of the dispensational system of eschatology may find outdated. For example, on pages 245-246 Pentecost explains the fulfillment of Daniel’s sixty-ninth week of prophecy, as calculated by Robert Anderson, to be Christ’s triumphal entry on April 6, 32 AD. This contradicts the recent scholarship of fellow Dallas Seminary professor Harold Hoehner, who more accurately concludes that Christ entered on March 30, 33 AD[1] based on one of the facts that Anderson’s date would put Jesus’ crucifixion on a Sunday or Monday.

Secondly, in regards to the millennial sacrifices, Pentecost states that sacrifices “will have no relation to the question of expiation” (p.524). This is true in one sense but the more recent scholarship of Randall Price has also shown how the term expiation will be significant during the Millennium when those who are in mortal bodies will need to be made ceremonially clean. They will need to be ceremonially cleansed (kipper) in order to participate in the Temple worship service with the result that the sacrificial system will have to be a necessity in order to uphold corpus sanctity, and thus reconciling this expiation dilemma.[2]

Finally, one may find himself wishing that Pentecost would have devoted much more time to Greek exegesis in some of the more debated arguments relating to dispensational theology, rather than resting on logical inferences alone. Aside from these two points though, there are no major problems of consistency that underlie the theme or purpose of Pentecost’s overall premise.

Pentecost has painstakingly set out to accomplish a major effort in disseminating a mountain of information regarding Biblical eschatology. With a keen mind for logic and a godly commitment to present the facts as they are, he has given a great gift to the Church. It is for this reason that I would strongly recommend this work to anyone who has a desire to know God and His program for the ages more intimately. I also believe that in the final analysis the reader will find his time and his money well worth spent.

[1] Harold W. Hoehner, Chronological Aspects of the Life of Christ, (Grand Rapids: Zondervan, 1977), p.138.
[2] For a more detailed analysis of the expiation argument during the “Millennial Kingdom,” see Randall Price, The Program For The Last Days Temple, (Eugene, OR: Harvest House, 1999).