For the Glory of God – Book Review 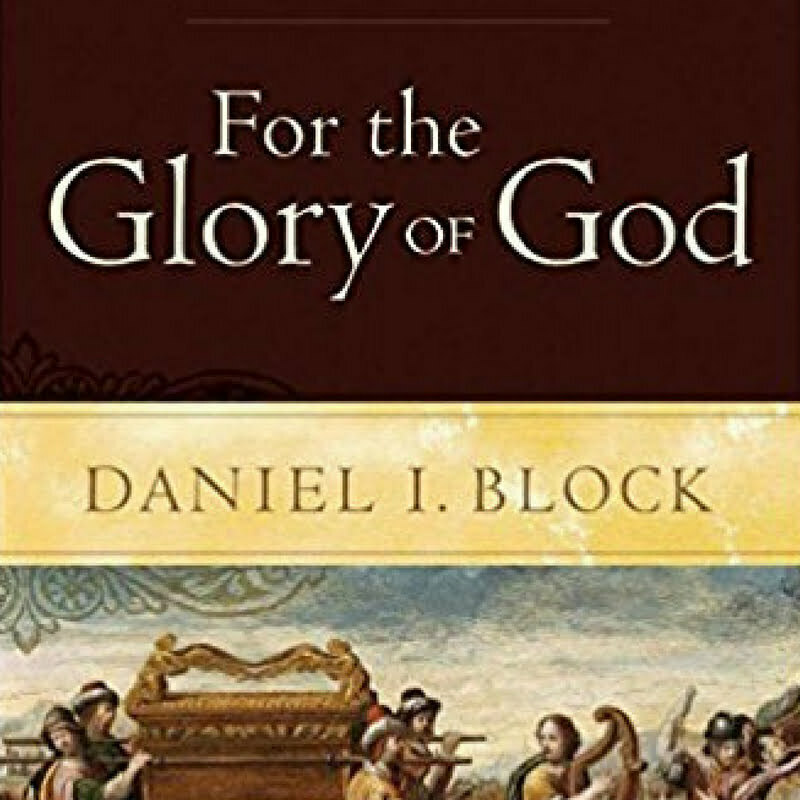 Daniel I. Block is Gunther H. Knoedler Professor of Old Testament at Wheaton College in Wheaton, Illinois. Block holds advanced degrees in Old Testament studies and Hebrew from Trinity Evangelical Divinity School and the University of Liverpool. Over his long career as a Christian theologian and educator, Block has published many scholarly journal articles, essays and books, covering a wide array of philosophical and theological subjects, enlightening both the church and the academy. In one of his most recent works, published in 2014, Block has set out inform the Evangelical world about the true nature of biblical worship. According to Block, the problem with the contemporary worship model is that it lacks in its full biblical expression of man’s demonstrating his reverence for God. The church seeks to be more pragmatic in its worship engagement rather than adhering to the complete corpus of biblical revelation and all that it entails. Block hopes to change this by systematically covering the concept of worship through the lens of sound biblical theology, as revealed in both Testaments of Scripture. Block’s expectation is that worship can be recovered if Christian leaders and their congregations adhere to the Scripture’s prescribed means rather than relying on pragmatism, autonomous preferences or New Testament mandates alone.

Block begins his work in the opening chapter by examining the various dimensions of biblical worship and then sequentially labors from both the Old and New Testaments how the Scripture defines the acceptable practices and expressions man utilizes for and in worship. For Block, “True worship involves reverential human acts of submission and homage before the divine Sovereign in response to his gracious revelation of himself and in accord with his will” (23). Unlike other contemporary works on worship that he mentions, such as David Peterson’s Engaging with God: A Biblical Theology of Worship (IVP Academic, 2002), which emphasizes worship based predominantly on the New Testament model; Block’s work is more extensive. Block provides a more robust treatment of worship in that he advances that unless the New Testament abrogates ritual or cultic expressions of worship from the Old Testament, which he calls the First Testament; they are still binding on the church (7). This becomes the basic presupposition for the rest of the book as Block labors worship-related themes from each chapter, revealing a fuller more expressive concept of biblical worship. The strength of this work is Block’s superior command of the Old Testament forms for worship as they relate to the New Testament church. Each chapter discussion centers on subject matter ranging from topics that include the object and subject of man’s worship, daily life, family and work as worship, cultic expressions of worship, the design and scope of worship and then concludes with the role of leadership in worship.

What the reader will find appealing is that Block provides scriptural justification for multifaceted forms of worship and how the early church synthesized these facets of biblical data, which then became the Church’s norm for worship. The reader will also understand how and why the contemporary Church worships in the manner that it does or in how it fails to do so if it is not following Block’s thesis. Each chapter is sure to reveal some morsel of truth that the reader will learn afresh or perhaps be reminded of and then be able to apply it based upon Block’s insights.

For example, Block notes that in the contemporary church there are many praise and worship songs that appear to emphasize man’s relationship and love for God. Block suggests that this is actually a misguided notion not supported by the Scripture. Worship in music and song is not about what man does or can do for God. Accordingly, God is most glorified by man’s worship when His people sing of Him rather than when man sings self-lauding songs which emphasize man’s love for God (237-238). The reason is that biblically speaking, covenant love is action not words and as Block reminds the reader, “Mouthing words is easy, but actions represent the real test” (239). While songs of which Block bespeaks inundate many contemporary churches and have become the norm for the worship setting, this is but one of the many examples where readers will have their beliefs about worship challenged and perhaps even urged to reconsider the use of some of the current praise and worship paradigm that dominates the church.

Another strength that sets Block’s work apart from other works on worship, particularly for leaders in the church, is his last chapter. Here Block labors, quite extensively from both Testaments, the defining roles of worship leaders. Beginning with the patriarchal period and advancing through the early church, Block qualifies the duties and assets ministers must possess in order to fulfill their ministerial obligations. The reader, particularly those involved in church leadership, will appreciate Block’s perspective in that ministry is rarely about leading a worship service. Rather, leadership is about being engaged in the ministry of teaching, encouraging, and meeting the needs of the flock (359). In addition, Block’s work concludes by providing appendices that elucidate his overall thesis. While educational, encouraging and in some instances, bordering on devotional, this is not to say that Block’s work is without troublesome areas theologically. These are associated with Block’s fundamental presupposition regarding the continuity of the Old and New Testaments (25-26). As such, readers may well find that the greatest strength of Block’s work may also be its greatest weakness.

It appears that Block attempts to deemphasize the priority of New Testament hermeneutic in favor of the Old Testament’s emphasis for interpreting and applying worship principles. If what Block suggests is accurate, then how does one determine the validity of specific cultic or ritualistic worship practices in relation to the dispensation of the Church? This is where Block is a bit unclear in determining how much and to what degree these Old Testament prescriptions regarding worship are still applicable. Block states that all truth is God’s truth and that Scripture determines the theology of worship but he falls short in developing a clear line of demarcation between what he believes should be continued practices verses those practices that that have been clearly abrogated (6).

For example, while the Mosaic Law provided Israel with a specific moral and ritualistic code for worship, it also provided civil and criminal mandates by which Israel could regulate society at large through the enforcement of civil and criminal penalties. If the Law is to be taken as an indivisible unit, then determining the degree of a cultic or ritualistic prescription, in terms of how it would be expressed in contemporary society, is difficult to say the least. Moreover, if pragmatism or autonomy in any way dictates the Law’s extent and application in the contemporary worship model, then Block could potentially be charged with the very thing that he speaks against in espousing the continuity of First Covenant mandates in relation to the current dispensation. This is an aspect of Covenant theology, which this reviewer assumes Block holds, given his covenantal stance and emphasis that plagues many theologians that have previously engaged this discussion. By Block’s own admission, God does not accept the application of His law or cultic expressions of worship by just any means (84). It is to be applied according to His revealed will. This is the dilemma that ultimately plagues Block’s well-meaning intentions and one he does not labor enough in resolving the continuity-discontinuity discussion. The reader will find that aside from this obscurity, there are no other major theological flaws in Block’s presentation.

“For the Glory of God” is an irenic, direct and candid discussion of biblical worship from the perspective of one of today’s most conservative, Evangelical theologians. Block’s work is systematic, in that it leads a discussion on the meaning and implication of worship from the Old and New Testaments, apart from the pragmatism and personal preference models that seem to dominate the contemporary church. In presenting the material and supporting documentation in this fashion, Block accomplished his task. By demonstrating how worship impacts the individual and the corporate body from the Scripture’s entire corpus, Block has instructed the church in how and why worship is to be conducted. As such, Block’s work is a must have for anyone exercising leadership in the church. Readers that implement Block’s challenges will find both their effort and money well spent. As such, this reviewer would highly recommend Block’s work as a valued addition to any theological library.